I like to do things correctly.  Like, check out the correct spelling of towns and villages to ensure the smooth running of The Run Of The Country.  Despite my best efforts to be correct I was wrong.  Really wrong,  I misled people.  Some riders ended up in Kerry.  I don’t think they were very upset.  Getting lost is all part of the run and the fun.  It always happens. When you arrive at a check point you think you have come the correct route.  Then you take a look around, and you are followed into the check point by bikes coming from a completely different direction.  Who was correct?  This year was no exception for alternative routes.

Mr Good Sense Of Direction and Mr Ordnance Survey and Mr Garmin sometimes differ.  This year’s Run Of The Country got a dose of this discord.  The ultimate Poker Run checkpoint of this year’s run was in the car park of Cahir Castle. Everyone knows that Cahir is in Co. Tipperary. Everyone spells it as Cahir.  The signposts say Cahir.  I was checking this out on my Ordnance Survey Road Map Of Ireland to discover nice Mr Ordnance Survey spells Caher with an “e”. Confusion resulted because of this little spelling anomaly.  Oops. 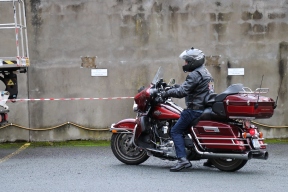 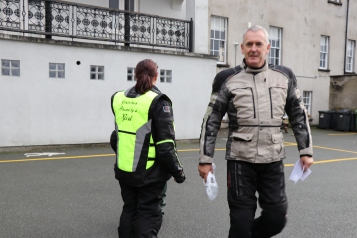 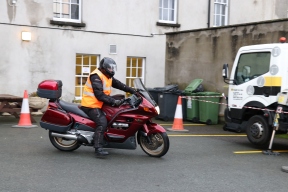 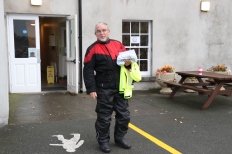 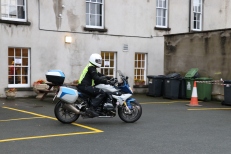 Elaine Leavy show off her jacket

It was amazing that everyone was bang on time this year.  Although there was the usual “no shows” and surprise unexpected  bikers.  It all sorted it self out thanks to Audrey Jackson and Joan Hand.  Everyone was registered and headed in for the bikers’ breakfast on time.  Indeed the bikers’ breakfast generally has sufficient calories to keep two underage soccer teams going for 90 minutes.  The weather was grey and the forecast was poor.  Heavy rain was due into the south east in the afternoon.  There could be no avoiding it.  Luckily the riders didn’t know where they were going.  Optimistically the riders paid no attention to the weather forecasters.  Riding bikes in Ireland means you will get wet some days. 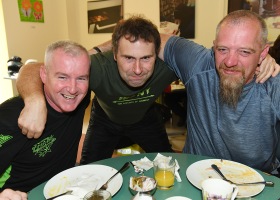 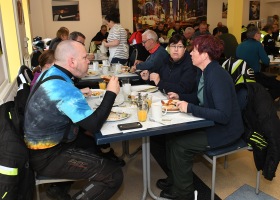 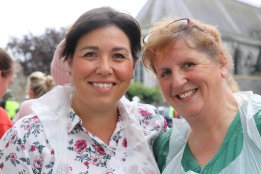 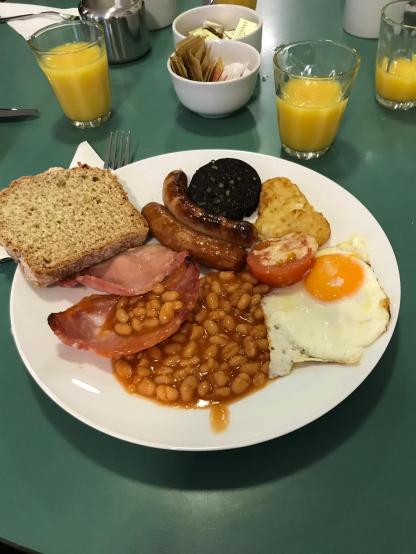 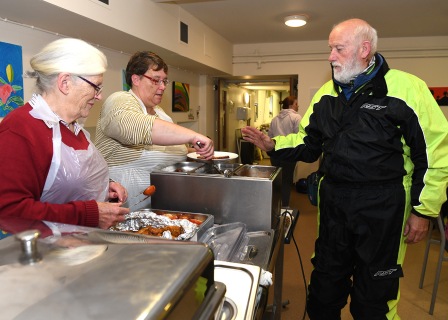 After the breakfast there was the photoshoot.  Then the bikers and pillions headed for Kinnegad, the first check point.  It was manned by James Tobin and Tommy Tully. The route followed the Boyne River past Donore and the site of the Battle of the Boyne 1690.  Then along the river with views of Newgrange and 6000 years of history.  A good twisty start brought the riders to Navan then Trim and Longwood.  About three kilometres out of Longwood is the Grand Canal aqueduct paired with the railway bridge. Both form an interesting group of tight corners under the canal and the rail line. Great old engineering from the nineteenth century was not designed for current large HGVs who take up the whole road.  Scary on a motorcycle. 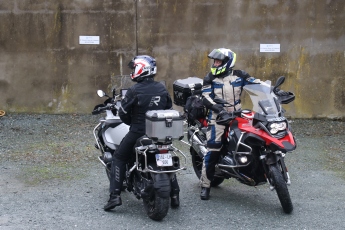 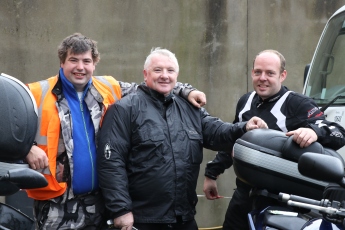 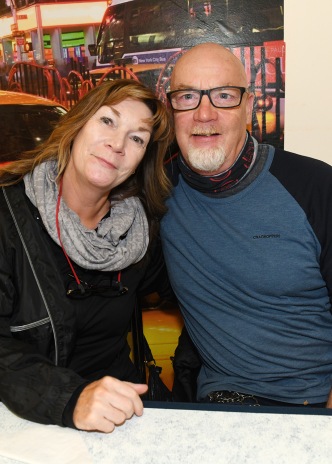 Ok Jimmy. Ready when you are? 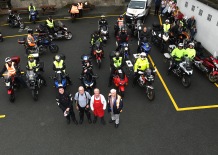 Whats he doing up there 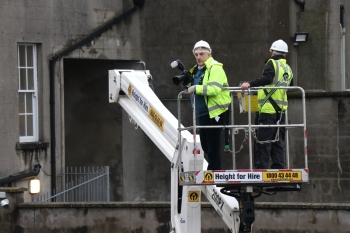 Jimmy Weldon on the up 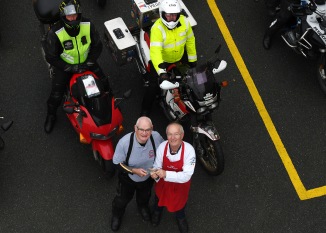 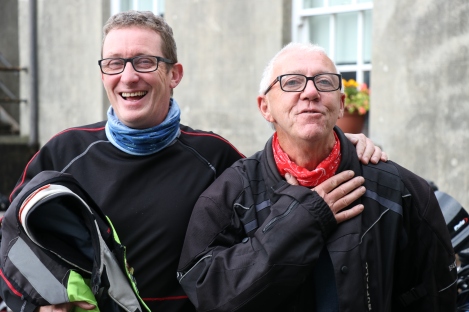 Do you think he will be much longer

News that Ireland lost the rugby to Japan was revealed in Kinnegad.  A sporting disaster and a portent for a poor performance in the whole of the Rugby World Cup.  The defeat deflated some riders for about 2 minutes.  After a cup of coffee and drawing the second playing card for the Poker Run, off on the 40 mile section to Clonaslee.

To Dolla? Where is that.

Big national routes brought the bikers to Tullamore.  The road to Clonaslee had a few major bumps that surprised some bikers when they lost contact with the saddle.  Clonaslee is a one street hamlet and it looks forgotten.  Mark Tobin did the honours here and checked everyone in for the Poker Run. Bikers arrived from both the east and the west. There were two pubs.  Unfortunately one of the pubs was closing its doors that evening never to sell a pint of plain again.   Clonaslee would revert to a one pub village.

It was up and over the Slieve Bloom Mountains next.  This is a favourite single track road with great views on a summer’s day.  Unfortunately the low cloud and rain put paid to the extensive views over the Bog Of Allen.

All the bikers stopped in the Obama Plaza Services Staton in Moneygall.  Great facilities and lots of tours groups stopping for breaks.  This is an opportunity for people to admire the motorcycles and chat with the riders.  Sometimes people make contributions to the fundraising when they hear it is a charity bike run.  Next check point was Dolla.

The cut of them

“Dolla is a village in County Tipperary in Ireland, on the crossroads of the R497 and R499 regional roads. It is located at the foot of the northern flank of the Silvermine Mountains, 8 km south on Nenagh. Services in Dolla include a public house, petrol station, shop-pub and a post office.” Wikipedia says it all.

Ben Lennon had the misfortune to part company with his bike a week before The Run Of The Country.  Fortunately he was wearing top class biking gear that worked perfectly.  Unfortunately he was unable to ride because of the friction burns he received as he slid down the road at 100kpm.  Undeterred and determined to join the run he did the check point at Dolla with his wife Marion.  Well done and thanks to them both.  He brought his drone along and kept himself amused flying it.  He took some smashing photos. 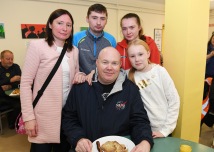 Dolla was where James Tobin decided to compose a new route, lose his biking companions and head for Thurles where he picked up a puncture  Bad luck. Regardless and fortified by first class AA insurance he made it to Dungarvan via Taxi and car rental.  I’m sure he will dine out on that story sometime soon.  Also Dolla is where Mr GPS, Mr Ordnance Survey and Mr Good Sense Of Direction came a cropper.  Caher in Kerry beckoned some riders using GPS.  Others used old technology followed the route maps and went to Cahir in Tipperary.

The weather took a turn for the worse.  The Silvermine Mountains are a wonderful spin on a sunny day.  Today it was full on concentration because of the wet weather.  Politely describing it as a very technical run hides the true skill sets that are needed to keep a motorcyclist and their bikes as one unit.  Well done to everyone who did the Silvermines section. 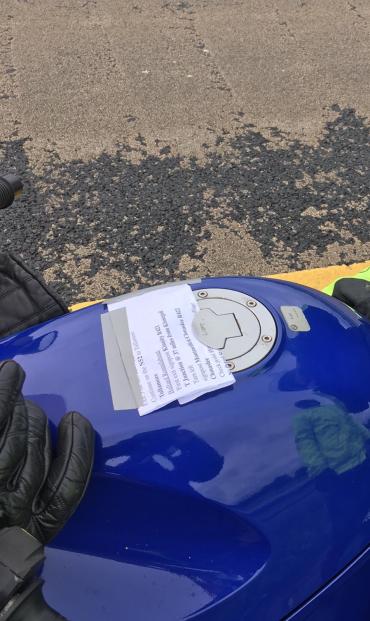 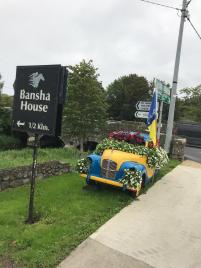 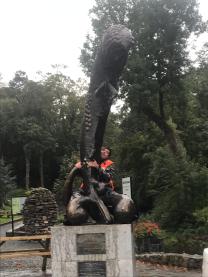 On a short leash 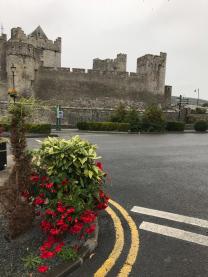 Game over for Jame Tobin 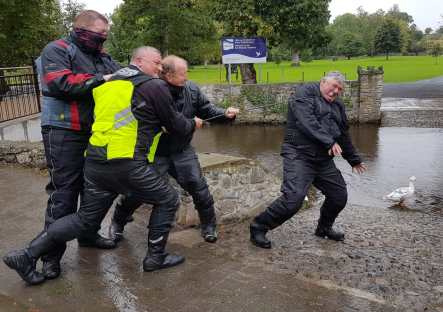 Wet and weary the bikers came to Cahir check point manned by Shirley Byrne.  Shirley had a torrid time with venders of contraband cigarettes parking close by making her very nervous for her personal safety.  She moved her car to a more visible position in the car park. There was no hanging around chatting in Cahir.  Pull a card and head for Dungarvan was the only option.

It was everyone for themselves now.  Getting a direct route to Lawlors Hotel in Dungarvan was the priority.  The suggested route was over the ‘The Vee’.  The “Vee” itself is 2,000 feet above sea level.  It is  a very tight hairpin bend overlooking the ‘Golden Vale’ between Knockmealdown and Galtee Mountain Ranges.  Some brave bikers went for the “Vee” over hill for the thrill.  Others tired and wet went for the better road to Carrick-on-Suir.  Bad luck again on this road as the road to Dungarvan was closed.  The bikers were rerouted along other interesting roads in which they had no business or interest only to get out of the rain as soon as possible. 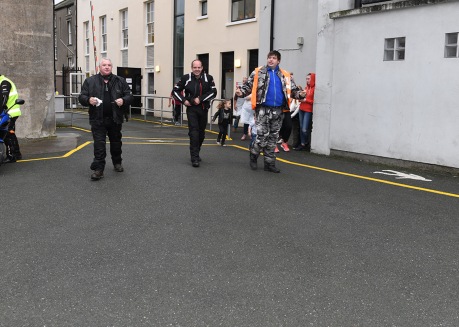 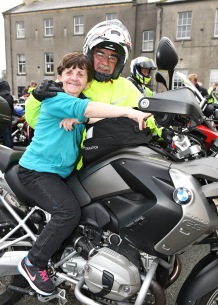 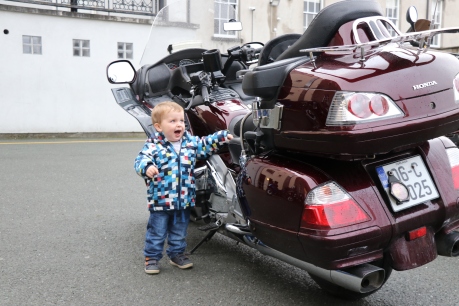 Eventually everyone got to Lawlors Hotel.  Weary, wet and grateful for sanctuary.  All assembled for a fine dinner.  There was plenty of banter and joking.  Speeches were made and tributes paid to riders organisers.  In particular Aidan Lynam, Rory Smith and David Carney were remembered.  All participated in the The Run Of The Country in their day and remain now in the hearts of those who loved and cherished them.  It was an emotion evening.

The anchor sponsors Height For Hire and Kennedy Motorcycles who sponsored the Poker Run for the last 10 years had their contribution and support acknowledged with commemorative plaques.  Also Tuites Butchers contribution of the breakfast meats for 10 years was similarly recognised.

There was a spot prize draw for 25 wonderful prizes.  Also a Valentino Rossi replica helmet in a presentation case was auctioned.  Total fundraising on the night was €1029.40.  The net amount raised for Malta Services this year was €9500.  A tremendous effort from everyone.  In total, over the 10 years €97000 has been raised for local charities by the riders and sponsors of The Run Of The Country.

This year was the tenth and final run.  A wonderful group of riders signed up.  The usual suspects along with a number of new riders too.  Everyone put in a special effort to ensure that it was a great success. The service users, guardians and staff of Malta Services all wish to express their appreciation of their participation.

The sourcing of reasonably priced accommodation has proved to be very difficult in the last few years.  Unfortunately accommodation price has diminished the charitable return on the event.  Accordingly the final tour has been travelled.  The memories of this little bike run will live long.  I will miss it.  Thank you for your company over the years.  It has been a privilege to have worked and travelled with a really fine group of people. We had a blast. 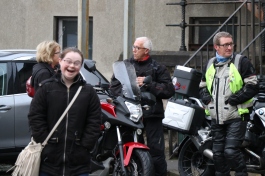 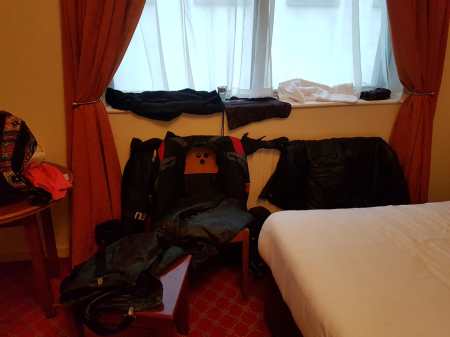 Drying out the gear 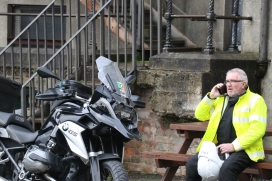 Paul Healy on the blower 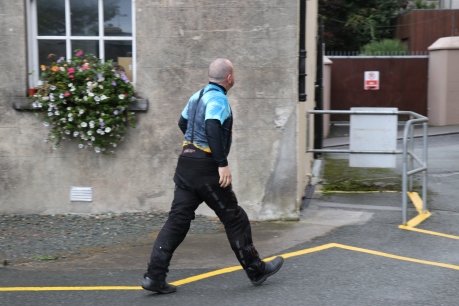